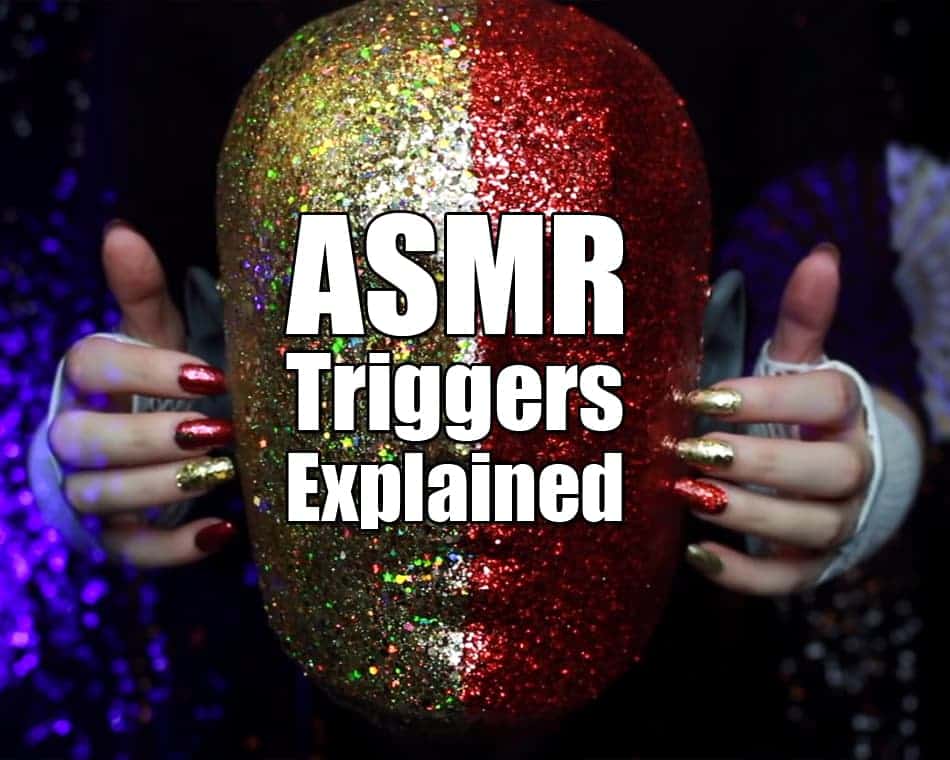 Have you wondered what’s making you feel ASMR? If you watched enough ASMR videos, you know certain things make you feel tingles no matter what. These seemingly-random cues are called “triggers” – and they are the key to unlock your ASMR.

There are countless ASMR triggers. They are so many you can easily lose yourself in them! We are going to explain to you what ASMR triggers are, how many types are there, a list of the most popular ones and how to find the right ASMR triggers. That way, you can get the best ASMR possible!

What are ASMR triggers?

An ASMR trigger is a stimulus that will provoke a physiological change in you. Simply put, it is a sound, touch or visual cue that will make you feel tingles throughout your body, relaxing you. There are plenty of ASMR triggers and several may or may not work for you.

If you are new to ASMR, you probably felt your first tingles in a real-life scenario: a whisper, a soft-spoken voice, someone brushing your hair or something similar. All of those things (and many, many more) are what the ASMR community calls “triggers”.

There are countless ASMR triggers. If it makes someone feel ASMR, it is considered a trigger. From whispering to eating and everything in between – that’s ASMR territory. There are three common categories for triggers: auditory, visual and tactile. There’s also miscellaneous, for triggers that fit in no category.

What are auditory ASMR triggers?

Auditory triggers are all about sound: whether it’s done with a voice or with something else entirely. Most ASMR triggers fall into this category – as ASMR is about pleasant sounds most of the time. Auditory triggers range from whispers to animal sounds, there’s a lot of ground to cover!

Auditory triggers are ASMR’s bread and butter – and also the first type of trigger ever recorded with ASMR in mind. The first one was whispering, but it didn’t stop there. It kickstarted an entire community. Most ASMR videos have some kind of auditory trigger in them but not all videos are about them exclusively.

What are visual ASMR triggers?

Visual triggers are not as many as auditory triggers, but still second in popularity. They provide no sounds but engage the viewer through his or her eyes. Slow hand movement is the prime trigger in the auditory category – one that is often used in ASMR videos.

Even though most videos rely on auditory triggers, visual triggers are great to fire your ASMR. Visual triggers add a layer of intimacy to most ASMR videos – as if the ASMRtist is directly interacting with the viewer.

What are tactile ASMR triggers?

Tactile triggers are different from most triggers – and perhaps the strongest of them all. This is because you can only experience them in person and not through an ASMR video. A gentle touch, a deep massage or a relaxing shave are examples of this trigger.

Tactile triggers are one of a kind, and usually have long-lasting effects on whoever is feeling the tingles. But you don’t have to undergo a one-hour massage session to experience this trigger, a simple touch can make you feel tingles like never before.

What are miscellaneous ASMR triggers?

There are a couple of triggers that do not fit in any category or are a mixture of two or more kinds of triggers. They are called “other or miscellaneous” triggers. It is a small, less-known niche – but a great one nonetheless.

Miscellaneous triggers usually require a lot of production value, whether it’s because there are a lot of things going on (a roleplay video) or because it’s an instructional for something else entirely (and not filmed with ASMR in mind, called unintentional.)

How to find your ASMR triggers?

There is no sure way to know what triggers will fire tingles through your body and which ones won’t. There are common triggers shared throughout most of the ASMR community (like whispering), but the only way to find out is by taking the time to try different triggers and videos.

It takes time to find out what works and what doesn’t. The main key is to not get complacent with your search. Don’t fall in love with one trigger in particular and overdo it as not to build a tolerance. If you find a trigger that shoots tingles through your body right away, that’s awesome! But it’s best to keep looking for new triggers.

Once you get to know a couple of triggers (and quite possibly, ASMRtists that know how to do them right) you can rotate them and avoid ASMR immunity. Nobody likes to feel how their triggers slowly stop working – and there’s no reason not to play it smart and avoid that altogether.

If you are unsure about where to start looking for triggers, here are three amazing videos to begin testing the ASMR-waters!

What ASMR trigger is right for me?

There is only one person in the world that can answer this question: you! Triggers are an extremely personal thing – you may love a particular trigger and it might not work for a friend of yours. That wouldn’t mean it’s a bad trigger; triggers simply don’t work for everyone.

ASMR triggers are personal, first and foremost. There are people out there that love eating videos, and other people who simply cannot stand it. Your triggers (or someone else’s) are in no way, shape or form universal – something you need to take into consideration when you are looking for triggers, recommend triggers to someone or take a trigger recommendation.

Even if one trigger does not work for you, there is no reason to give up on that particular ASMRtist or disregard future recommendations from a friend. You never know what kind of tingles are waiting for you in the future!